At the hibachi table restaurant in Japan, chefs transform cooking into performing arts by preparing food for you on a large hibachi grill. The star of a teppanyaki table dinner is usually a meat dish prepared over an open flame, but zucchini and onions are almost always prepared as a side dish. Most restaurants cook zucchini on a teppanyaki grill, which has a flat surface-you can easily remake this dish at home in a cast iron pan. 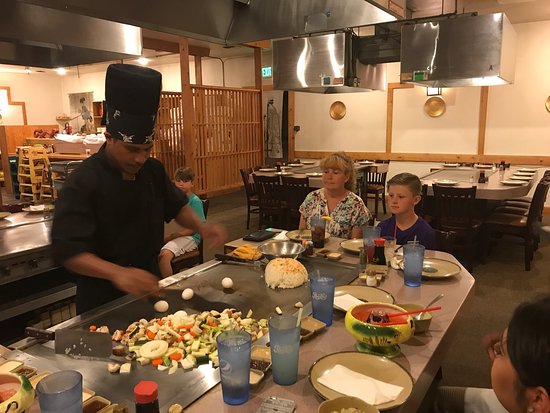 Spread butter or sesame oil on the bottom of the pan. Heat the frying pan until the oil starts to smoke. Brush the zucchini and onion slices with sesame oil to increase the flavor and prevent the vegetables from sticking to the pot.

Put the onions in a saucepan and cook, stirring often for about 3 minutes, or until the onions are soft and start to become translucent. Onions take longer to cook than zucchini, so cook for a few minutes before adding zucchini to ensure that both vegetables are eaten at the same time.

Add zucchini and onion and stir to combine. Season the vegetables with salt and pepper.

Saute the zucchini and onions for about 3 minutes, or until they are medium golden brown. Stir the vegetables constantly when cooking to prevent sticking to the vegetables.

Put the zucchini and onion on the plate. Garnish with a little toasted sesame seeds.